Facility Description: The Salton Sea Test Base was used for a variety of activities such as military training and weapons research, development, testing, and evaluation. The base was used by numerous tenant and non- tenant military commands as well as by research divisions of government agencies and private companies working on government projects. The site was established in 1942 as an operational base for seaplanes during World War II. Later, the Atomic Energy Commission renovated and expanded the base for aerodynamic testing of weapons-delivery vehicles. From 1946 to 1961, Sandia National Laboratory operated a testing program at the site. The remoteness of the area was ideal for training and other operations. It is unclear from the documentation whether this testing work involved the use of radioactive materials.

The site (now closed) is being remediated by the Corps of Engineers under the auspices of the Department of the Navy.

*A formal request was made for the Manhattan Engineer District be allowed to use the Salton Sea Test Base in the post-war period. Sitting some 200 feet below sea level and offering excellent testing weather for most of the year, the Salton Sea site allowed Z Division to test ballistic performance in dense, sea-level atmospheric conditions. In June 1946, the U.S. Navy’s buildings at the site were transferred to the U.S. Army for use as a bombing range by Z Division. Sandia used the site until 1960. 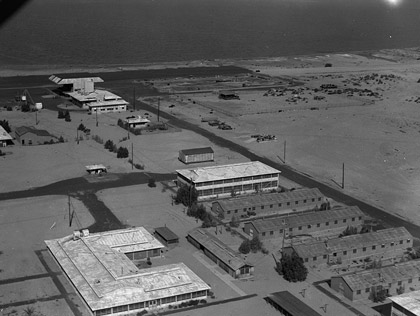 Listing:
Sandia Laboratory, Salton Sea Base is listed as a Department of Energy (DOE) site under the EEOICPA.

Compensation:
As of 05/17/2015, the total compensation paid under Parts B and E of the EEOICPA, including medical compensation, for workers suffering from the effects of having worked at Sandia Laboratory, Salton Sea Base is $1,004,257.

Sandia Laboratory, Salton Sea Base Workers:
If you or your parent worked at this or any other DOE or AWE facility and became ill, you may be entitled to compensation of up to $400K plus medical benefits from the US Department of Labor. Call EEOICPA Counsel Hugh Stephens at 1-855-EEOICPA (336-4272) or fill out the form to the right, even if your claim has been accepted or denied.