Facility Description: Brookhaven National Laboratory (BNL) is the former site of a U.S. Army installation (Camp Upton) and has been involved in research and development activities in support of the Department of Energy (DOE) and its predecessor agencies since 1947. BNL’s facilities conduct basic and applied research in high energy and nuclear physics and in other areas of science.

Listing:
The Brookhaven National Laboratory (BNL) is listed as a Department of Energy (DOE) site under the EEOICPA.

Classes:
The SEC classes for BNL include all employees of the Department of Energy, its predecessor agencies, and its contractors and subcontractors who worked at Brookhaven National Laboratory in Upton, New York, from January 1, 1947 to December 31, 1979, and from January 1, 1980 through December 31, 1993 for a number of work days aggregating at least 250 work days, occurring either solely under this employment, or in combination with work days within the parameters established for one or more other classes of employees in the Special Exposure Cohort.

Compensation:
As of 08/16/2015, the total compensation paid under Parts B and E of the EEOICPA, including medical compensation, for workers suffering from the effects of having worked at the Brookhaven National Laboratory is $115,920,000.

Brookhaven National Laboratory Workers:
If you or your parent worked at this or any other DOE or AWE facility and became ill, you may be entitled to compensation of up to $400K plus medical benefits from the US Department of Labor. Call EEOICPA Counsel Hugh Stephens at 1-855-EEOICPA (336-4272) or fill out the form to the right, whether or not you have filed a claim and even if it has already been accepted or denied.

NIOSH site profile:
History:
Brookhaven National Laboratory (BNL) was established at the eastern end of Long Island in 1947 at the site of Camp Upton, a former U.S. Army base, and set out to explore peaceful uses of atomic energy through research. It was originally a part of the Atomic Energy Commission but now falls under the auspices of the Department of Energy. Brookhaven has several radiological facilities including research reactors, high-energy reactors, medical isotope facilities, medical research, and waste management.

SITE DESCRIPTION AND GENERAL INFORMATION:
Research Reactors
The Laboratory’s scientific history began in 1950 with the operation of the BGRR, a research reactor used for peaceful scientific exploration in the fields of medicine, biology, chemistry, physics, and nuclear engineering. The BGRR operated until 1968. In 1965, its capacity was replaced and surpassed by the HFBR, which provided neutrons to researchers of all disciplines, from solid-state physics to art history. The HFBR ceased operations in December 1996.

Medical Research Center
Medical research at BNL began in 1950 with the opening of one of the first hospitals devoted to nuclear medicine. It was followed by the MRC in 1958 and the Brookhaven Medical Research Reactor (BMRR) in 1959. The BMRR is the first nuclear reactor built exclusively for medical and biological research. It came on line on March 15, 1959, and operated until October 2000. The Radiation Therapy Facility (RTF) was operated jointly by the BNL Medical Department and the State University of New York at Stony Brook. The RTF was a high-energy, dual X-ray mode linear accelerator (LINAC) for radiation therapy of cancer patients. The RTF has been dismantled and is not operational. Chemists and physicians teamed to view the inner workings of the brain in 1977 with the advent of PET cameras. Two more imaging techniques were added to the PET research efforts to form the Center for Imaging and Neuroscience in 1996. Except for the BMRR, all of these facilities are currently operating.

Particle Accelerators
High-energy particle physics research began in 1952 with the Cosmotron, the first particle physics accelerator to achieve billion electron-volt energies. The Cosmotron operated from 1953 to 1966. In 1960, the Alternating Gradient Synchrotron (AGS), a large accelerator, was built to surpass the Cosmotron’s capabilities. The AGS is capable of accelerating protons to energies up to 30 GeV and heavy ion beams to 15 GeV/amu. The AGS achieved full energy in 1960 and is still in use.

The Brookhaven LINAC Isotope Producer (BLIP) became operational in 1973. Protons from the LINAC are sent through an underground beam tunnel to the BLIP facility where they strike target metals. These metals, which become activated by the proton beam, are then processed at the Target Processing Laboratory (TPL) for use in radiopharmaceutical development and production. The targets are cooled by a continuously recirculating water system. The BLIP facility underwent significant upgrades in 1994 in support of the Brookhaven Isotope Research Center program. The 200-MeV Proton Linear Accelerator serves as a proton injector for the AGS and supplies a continuous beam of protons for radionuclide production by spallation reactions in the BLIP.

In 1982, the National Synchrotron Light Source (NSLS) began operation. The NSLS guides charged particles in an orbit. As the electrons spin inside a hollow donut-shaped tube called an electron storage ring, they emit light called synchrotron light. This light, which can be detected by specialized instruments, is used to study the properties of matter. The NSLS uses a LINAC and booster synchrotron as an injection system for two electron storage rings that operate at energies of 750 MeV vacuum ultraviolet (VUV), and 2.5 GeV X-ray. The synchrotron radiation produced by their stored electrons is used for VUV spectroscopy and for X-ray diffraction studies.

Brookhaven’s newest accelerator facility is the Relativistic Heavy Ion Collider (RHIC), which was completed in 1999. The RHIC is designed to recreate a state of matter that scientists believe existed moments after the universe was formed.
Department of Applied Science The TPL (also called the Hot Laboratory in 1993) officially opened on January 15, 1951. The original purpose of the central facility was to provide appropriately shielded areas for research with large amounts of radioactive material. The “hot” area of the Hot Laboratory included five hot cells, three chemical-processing hot cells, and three high-level hot cells for handling and processing of radioisotopes in gaseous, liquid, or solid form. In 1971 and 1972, the High Intensity Radiation Development Laboratory (HIRDL), which contained million-curie-range (in the early 1970s) 60Co and 137Cs sources, was used for source development and experimental process irradiations. A 60Co pool in the HIRDL facility operated at lower activity levels into the 1990s. 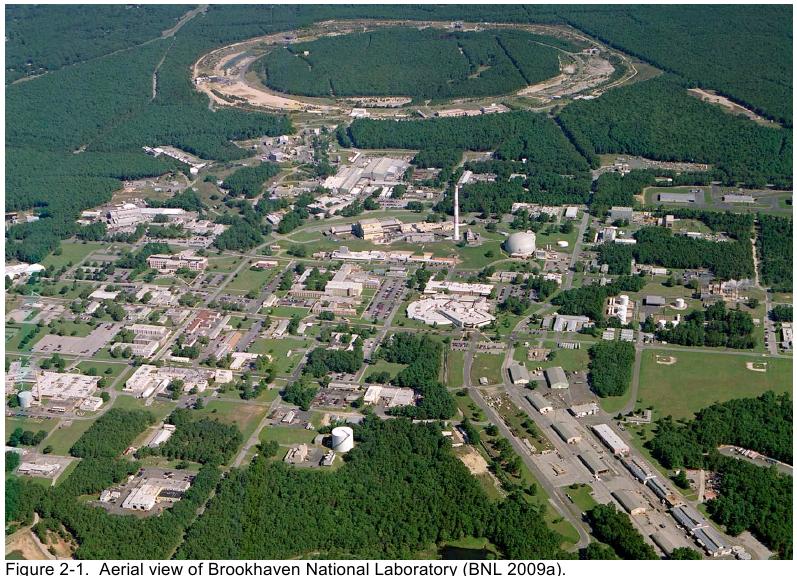 REVIEW OF THE NIOSH SITE PROFILE FOR BROOKHAVEN NATIONAL LABORATORY